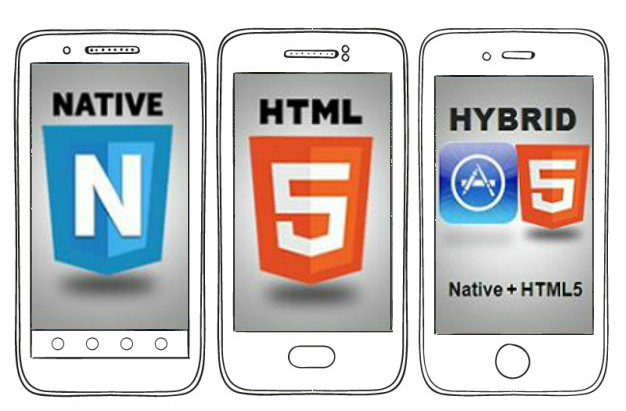 Posted at 06:20h in Uncategorized by admin 0 Comments
0 Likes

The hybrid vs native app debate remains one of the most popular discussions over the Internet omeprazole online.  Articles supporting either, are a dime a dozen. Before we can actually choose between hybrid and native apps, we need to understand the difference between the two.

What are Hybrid and Native apps?

A native mobile app is a smartphone app that is coded in a specific programming language. For example, iOS apps are coded exclusively in Objective C while Android apps use Java. Native iOS apps can’t run on Android and vice-versa.

On the other hand, hybrid apps are designed to work across multiple platforms. They could be defined as a cross between native apps and web apps.They are built mostly using web technologies like HTML, CSS, and JavaScript along with some platform specific languages and frameworks. The same code base is used to run the app on all platforms.

Since native apps are written exclusively for a certain platform, they can harness all of its features and potential, thus providing superior user experience, capabilities, and performance.

Other than the fact that they run on multiple platforms, the major advantage that hybrid apps provide is that they can be built much easier and faster than native apps and are also simpler to manage.

The major gripe with native apps is their lack of cross-platform compatibility. Developers would have to write specific code for every platform they want to use. This doubles the time, effort, and money required.

Hybrid apps can be unreliable and their appearance and performance won’t quite be as smooth. Hence, they don’t provide the best user experience.

Both hybrid and native apps have their strengths and weaknesses. At the end of the day, it all boils down to priorities.

If you want to focus on delivering the best possible user experience and don’t mind investing extra for other platforms, you should choose native apps.

If instead, you want to release your application as fast as possible and across multiple platforms, you should go with hybrid.

However, it should be noted, that web technology is improving by leaps and bounds. The gap in performance between hybrid and native apps grows shorter year after year. In the (hopefully) near future, we probably will see hybrid apps being crowned the undisputed victors in the app wars.